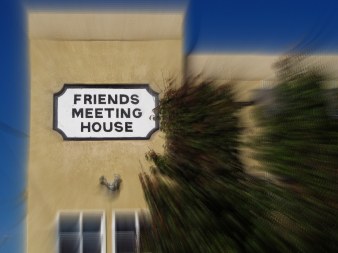 The light on a Sunday morning is always cool and soft. Indirect, from the north and west windows of the Meetinghouse.

It bathed the circle of chairs: Howard, his walker planted squarely in front of him. Gina, chic and trim and tan. Rose, her thin cardigan showing vertebrae beneath her shoulder blade, the S of scoliosis stamped on her spine. Rick, jiggling one leg—a runner’s body protesting inaction. Dozens of Friends more.

This meeting was a quiet one. No ministry was offered. Just chairs creaking, a sigh, a few snores, a phone hastily shushed. And then, after most of the hour had passed, the hush of real stillness: a “gathered” meeting resting in communion. A few minutes later, hands were held, greetings given. Eyes shone with soft light before the circle broke. I left before pot luck in a bubble of peace and love.

Outdoors: the glare of noon on concrete, asphalt, stucco. Broken glass in the alley behind the diner. Drifts of dirt and October leaves in the gutters, a Budweiser bottle, some dingy rags. This isn’t exactly a skanky part of town, but that’s the faintest praise I can damn it with. In Chicago the scene might have passed for noir. Under bright desert sun it was just faded—a B-movie western. Sunglasses on, window open, I eased around potholes in the alley to the street.

Across the way an SUV with Kansas plates was parked with its side and rear doors open. Two men sat inside. A third was outside rummaging through suitcases and coolers in the back, while a fourth looked on from the shadows. A gallon jug, a backpack or two, and a gas can sat on the sidewalk.

A gas can. To be out of gas and stranded on a Sunday, even in the era of cell phones—that’s no fun. I spared a sympathetic thought as I prepared to drive past. Then I heard the voice in my head:

“So, kid, what do you think all that peace and love are for?”

To be honest, I don’t normally think they’re for helping four strange men when I’m on my own. But the nudge was there. It poked me in my complacency, hard. What are all that peace and love for? I took a deep breath, stopped, and got out of the car.

“Can I help you with anything? I hate being stranded.”

After a surprised minute, one of the passengers said, “Hey, thanks, but we’re OK. This guy could use a ride, though.”

Whoa, whoa, whoa. Ride? We’d gone from a wink to a wedding in 5 seconds flat. I hadn’t planned on giving anyone a ride. I’m not sure what I had planned on. Filling the gas can, maybe, or picking up sandwiches and sodas while they waited for Triple A. Disembodied, feel-good help. Not help in close proximity to an actual stranger in my actual car.

“We’re getting out our extra water and some clothes for him, and we’ve given him some cash.”

The man in the shadows stepped into the light. I don’t remember details of his appearance—not the color of his clothes or his hair; his age. Just the dingy gray aura of the streets, as if dust and rags had come to life. He was smaller than me, bent, trembling. He looked at me with pale eyes that faced different directions.

“He needs to go to Fourth and Menaul. We’d give him a ride, but we’re headed the other way.”

This wasn’t what I’d bargained for. But the man didn’t seem drunk or drugged, just weak and shaky, perhaps ill. If he did threaten me, I could mosey away to safety.

“Would you mind putting out your cigarette?” I asked. It was a test question: was he aggressive? willing to accommodate?

“No problem,” he said. I offered him a ride.

The men in the SUV stowed their gear, shut their doors, and took off. “Have a blessed day,” they called, waving, as they turned up Fourth Street—toward Menaul.

I turned extra-polite, distant, in the ridiculous way of “good girls” who trust their manners to protect them. I opened the passenger door and rolled down the manual window while the man stubbed out his cigarette. He eased slowly (painfully?) into the seat.

As I opened my own door a cop car pulled up. Another uncertainty. Would this be a cop who thinks anyone not sitting with both hands flat on a table is committing a crime? Or a cop who wants to ensure everyone is safe and well? He got out of his car: a Safe and Well cop, the cavalry. Officer Friendly, with an easy bearing, easy voice, easy smile.

(Ben. I hadn’t asked his name. I hadn’t offered him mine.)

“Are you headed home from work? Can I give you a ride? We could let this lady go about her day.”

After a minute Ben sighed and struggled out of my car again, with the deep patience of someone used to being other people’s parcel. I knew then that I had not done this well.

“How was work this morning?”

The cop laughed as they drove off, and I, the would-be rescuer, had been rescued.

Five minutes of my life—not much time, but they coughed up a heap of perplexity. I drove home unsettled, wondering, analyzing, exploring. What risk had I just taken? What risk had I not?

Nothing had actually pushed my fear buttons. I had assessed the situation as well as I could and had not sensed a particular danger—just the general, potential danger of the unknown. Surprise had led me to treat Ben in a way I wish I hadn’t—as an object of mixed fear and charity. When surprise ebbed I would no doubt have seen his humanity and been human to him in return. My history tells me that, so while I regret my slowness I don’t castigate myself for it. I can even tell myself that the cop was better able to see to Ben’s needs.

What unsettled me was the nature of the surprise: the visceral realization that peace and love are not feelings. They are actions that bring risks and have consequences. They may germinate in soft, indirect light, but they do not grow up to matter in niceness. They mature in noonday glare, on concrete and pavement, where the rubber meets the road. They exist physically, body to body, face to face, between people with curved spines and runners’ calves and chronic illnesses and misaligned eyes. They are enacted amid uncertainty, confusion, and mess. And I’ve never been good at those.

I wish I had taken the risk well: that I had counted the cost before offering help and then offered it with a whole heart.

“So, kid, what do you think all that peace and love are for?”

What good is it, to run a risk halfway? Is safety always the most important thing?

What risks am I willing to run for kindness?

A while ago I blogged about the PACE trial, a UK-based study of treatments for ME/CFS that recommended Graded Exercise Therapy and Cognitive Behavior Therapy. I described problems with the trial’s protocols, patient criticism of the study, and a pending request for the data under the Freedom of Information Act. In the last few weeks, Queen Mary University of London lost the FOIA appeal and released the data. Re-analysis shows GET/CBT to be ineffective. My faith in the scientific process is being restored.

You can read a summary of the process by Julie Rehmeyer, a science journalist and ME/CFS patient, at STAT. Virology Blog has posted both a summary of the re-analyzed data and the full text of the analysis.